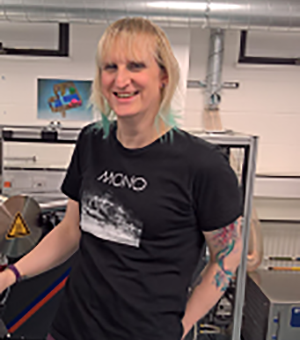 During my youth there were few LGBT+ role models around. I certainly never met any in my school, when section 28 was in force. I assumed that it was not ok to be transgender and as a result my mental health suffered, resulting in severe depression and suicidal thoughts that continued until I transitioned. When I finally came out as transgender I was met with absolute acceptance. As a trans-woman, I took a position with the Department of Materials and became the vice-chair of the University’s LGBT+ Advisory Group. Once I began living my life authentically, my mental health improved significantly, showing that it really can get better.

Outside of work, I was featured in Stonewall poster campaign and I work with Oxfordshire LGBT+ youth groups.  Which goes to show the importance of role models – be it in the work place, in schools, universities or the community at large. It is easy to say that these places accept people for who they are but it is vital to actually see that this is true.

I am a trained mentor and would be happy to mentor LGBT+ members of staff within the University, especially research and academic staff.

Read Clara's article in the Huffington Post: You Can Be Yourself And Be A Scientist Too.

If you would like to attend the Role Model training please email: