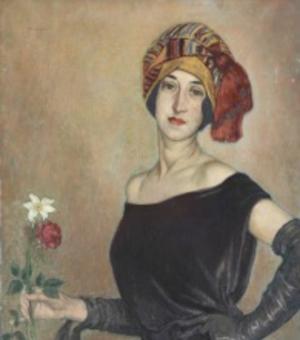 Marie Beazley was the wife the Oxford classicist, archaeologist and collector Sir John Beazley. A Jewish woman who had previously been widowed in the First World War, she was regarded by early twentieth-century Oxford society as eccentric: A.L. Rowse, a student at the time, described her as “an exotic figure against the ecclesiastical desert of Tom Quad” and notes that she was known for her flamboyant wardrobe and hospitality, and her pet goose, which she would take for walks. However, Marie Beazley also spoke several languages, and was a skilled artist and photographer. She assisted with her husband’s academic work, in particular taking many of the pictures of archaeological artefacts which make up the Oxford Classics Faculty’s Beazley Archive today.

Mrs Marie Beazley by Harry Bloomfield (1923). By permission of the Beazley Archive, Faculty of Classics, Oxford.